Agra Fort: is a historical fort in the city of Agra. It was the main residence of the emperors of the Mughal Dynasty until 1638 when the capital was shifted from Agra to Delhi.

Ranthambore: National Park is in the district of Southeastern Rajasthan and one of the biggest and most renowned national park in Northern India which spread over 392 sq. km. Being considered as one of the famous and former hunting grounds of the Maharajas of Jaipur, today the Ranthambore National Park terrain is major wildlife tourist attraction spot that has pulled the attention of many wildlife photographers and lovers in this destination.

Jaipur: Jaipur or Pink City is the capital of India’s Rajasthan state.

Amer Fort or Amber Fort is located in Amer town, located 11 kilometres (6.8 mi) from Jaipur. Originally built by the Mairs and later it was ruled by Raja Man Singh I. It is known for its artistic style elements and principal tourist attraction in Jaipur.

Day 01 Arrival in Delhi: Meet our representative upon arrival in Delhi and check-in at the hotel. India's capital & a major gateway to the country, Delhi is contemporary and a bustling metropolis which successfully combines in its fold the ancient & the modern. Its strategic location was one of the prime reasons why successive dynasties chose it as their seat of power. New Delhi also reflects the legacy the British left behind.

Day 02 Sightseeing in Delhi: After breakfast, proceed for a full-day tour of Old and New Delhi. This fascinating city has been in existence since the 6th century BC and has seen ups and downs from the rule of the Pandavas right up to the British Raj. Visit Jama Masjid. Enjoy a rickshaw ride in Chandni Chowk the busiest market in Old Delhi…noisy, chaotic and uniquely Indian. You will then drive past to the Red Fort. Later, drive past to India Gate, President House And several other government buildings in Edwin Lutyen’s Delhi before you head toward Rajghat, the memorial to Mahatma Gandhi. This simple memorial marks the spot where Mahatma Gandhi was cremated in 1948. Thereafter, visit Humayun’s Tomb, commissioned by Humayun’s wife Hamida Banu Begum in 1562. Later in the evening visit the Qutab Minar, which is the tallest brick minaret in the world; it was commissioned by Qutbuddin Aibak, the first Muslim ruler of Delhi. Return back to Hotel.

Day 03 Delhi – Agra (210 km/ approx. 4 hours): On arrival in Agra, check-in into your Hotel. Later proceed for Half Day City Tour of Agra. Visit the Red Fort, which was commissioned in 1565 by Akbar. The beautiful yet forbidding structure is a handsome example of Mughal architecture. Later, visit the Taj Mahal … a mausoleum built as a symbol of Emperor Shah Jehan’s devotion to his beloved queen Mumtaz Mahal. Considered an architectural marvel, its construction took thousands of workers over 21 years to complete.

Day 04 Agra – Ranthambore (230 km/ approx. 5 hours): After breakfast, drive to Fatehpur Sikri, which was built by Emperor Akbar and is home to many historical buildings. Akbar wanted to make Fatehpur Sikri his headquarters; however, he had to abandon it due to shortage of water. The Tomb of Sheikh Salim Chishti enshrines the burial place of the Sufi saint who lived a religious life here. Fatehpur Sikri is a UNESCO World Heritage site. Later drive to Sawai Madhopur (Ranthambore). India is home to a maximum number of tigers, 70% per cent of the global population. Ranthambore National Park, once a princely game conserve is the scene where the celebrated Indian tigers are best seen. Arrive Ranthambore and check-in to your hotel.

Day 05 Ranthambore: Today experience early morning and evening game drive in the Ranthambore National Park. Ranthambore Tiger Reserve lies on the junction of Aravali and Vindhyas. It sprawls over a varying and undulating landscape. The scenery changes dramatically from gentle and steep slopes of the Vindhyas to the sharp and conical hills of the Aravali. The tiger is not the only attraction at Ranthambore. A variety of birds including owlets, the ubiquitous langur (monkey), leopard, caracal, hyena, jackal, jungle cat, marsh crocodiles, wild boar, bears and various species of deer are the other attractions.

Day 06 Ranthambore – Jaipur (150 km/approx. 3 hours): After breakfast, drive to Jaipur - the gateway to the magnificent and vibrant state of Rajasthan. Arrive Jaipur and check-in to your hotel. Overnight in Jaipur.

Day 07 Jaipur: Today, enjoy a full-day sightseeing trip of Jaipur, also known as the ‘Pink City’… it is famous for its colourful culture, forts, palaces, and lakes. Visit the Amber Fort… a fascinating blend of Hindu and Mughal architecture. The best way to explore the fort is to ride up to it on elephant back. Later, stop to photograph the beautiful Hawa Mahal, also known as the “Palace of the Winds.” Post lunch, visit the City Palace. Later, visit the Jantar Mantar Observatory. You will also visit the Albert Hall, which was modelled on the Victoria and Albert Museum in London and is a fine example of Indo-Saracenic style of architecture.

Day 08 Jaipur – Delhi (250 km/approx. 5 hours): After breakfast, you will be transferred to Delhi and meet assistance at the airport for return flight back home.

Agra - Taj Mahal on every Friday

Ranthambore National park will be closed from July to September

Cancellation charges: 50% Retention will be charged after reconfirmation

No show charges: 100% Retention will be charged if the guests are no show

Refunds in case of Advances paid (if any) – No refunds. 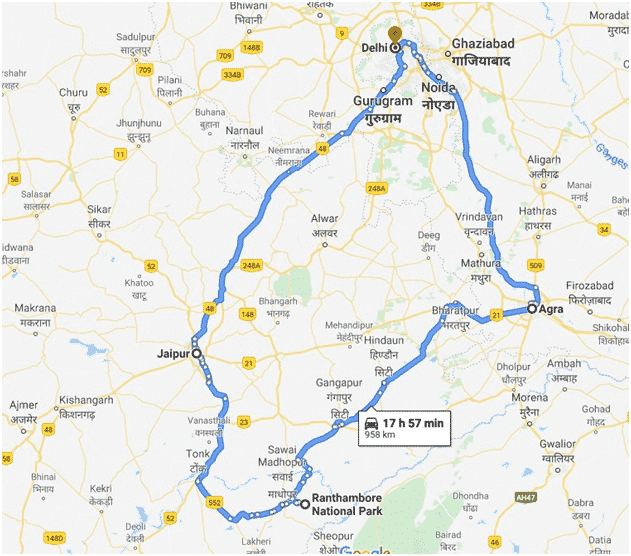