It is the largest country in the world, covering over 17 million square kilometers  and encompassing more than one-eighth of Earth's inhabited land area.

has 241 stations (276 with Moscow Central Circle) and its route length is 412.1 km (256.1 mi), making it the fifth-longest in the world and the longest outside China. The system is mostly underground, with the deepest section 74 metres (243 ft) underground at the Park Pobedy station, one of the world's deepest underground stations. It is the busiest metro system in Europe, and is considered a tourist attraction in itself

Mosco Kremlin : is a fortified complex in the center of Moscow founded by Russian ruling dynasty of Rurikids.  It is the best known of the kremlins (Russian citadels), and includes five palaces, four cathedrals, and the enclosing Kremlin Wall with Kremlin towers. In addition, within this complex is the Grand Kremlin Palace that was formerly the Tsar's Moscow residence. The complex now serves

as the official residence of the President of the Russian Federation .

The Peter and Paul Fortress : is the original citadel of St. Petersburg, Russia, founded by

Peter the Great in 1703 and built to Domenico Trezzini's designs from 1706 to 1740 as a star fortress. Between the first half of 1700s and early 1920s it served as a prison for political criminals.

Arrival at Moscow airport. Meet the escort assistant waiting for you at arrivals with name placard.

Transfer to the hotel.

Rest of the day is free

Return to the hotel, free time.

Day for leisure without guide and transport

Meeting with the guide for transfer to the hotel.

(Car/van/minibus and guides for transfers only)

Day  leisure without guide and transport

(Car/van/minibus and guides for transfers only)

Price in US$ per person on twin sharing basis

Rates are in US$ per Adult travelling together as below

Supplement for train ticket for day train SAPSAN 2nd class Moscow to St. Petersburg-starting from US$100 pp. Rate subject to availability and subject to change at the time of reservation

The package doesn't include:

Within 15days : no refund 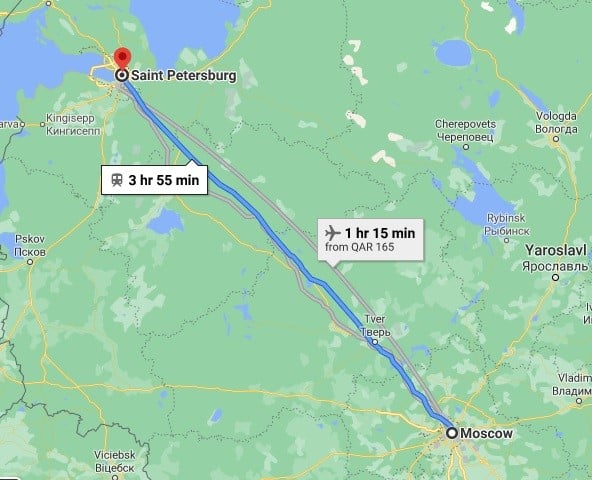